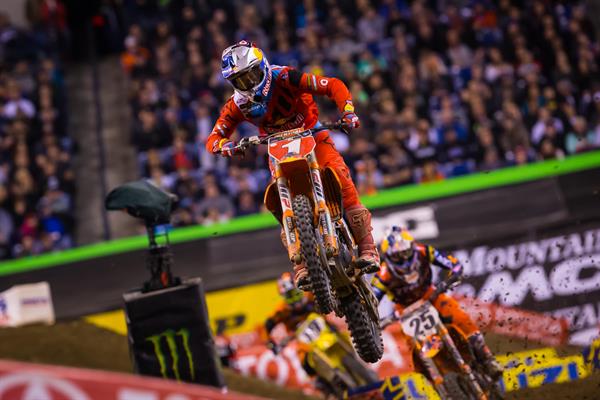 In 450SX Heat 1, Ryan Dungey didn’t get off to a favorable start as he began the race just inside the top ten. The three-time Supercross Champion quickly made his way into a top-five position where he stayed for the remainder of the heat race, just missing out on a transfer position.

In 450SX Heat 2, KTM riders got off to a great start with Rocky Mountain ATV*MC/WPS/KTM’s Blake Baggett at the helm. Baggett’s teammate, David Millsaps, jumped into the 2nd place position, followed by Red Bull KTM Factory Racing teammates Marvin Musquin and Trey Canard. Musquin climbed his way up to 2nd behind Millsaps out front and with two laps to go Musquin powered his way into the lead to ultimately earn his first heat race win of the season.

Dungey and Canard lined up for the 450SX Semi 2, where Dungey was able to play it safe to earn a 2nd place transfer into the Main Event. Canard encountered bad luck right away as he got caught up in a first-turn crash after the start. As a result, Canard was forced to go to the LCQ where he led a majority of the race to earn a spot in the Main Event.

Main Event
As the gate dropped for the 450SX Main Event, it was Baggett who grabbed the holeshot aboard his KTM 450 SX-F FACTORY EDITION with Dungey and Musquin close behind. As the running order settled it was Eli Tomac out front with Dungey in the 2nd place position, followed by Baggett in 3rd and Musquin in 4th. Baggett went down around the halfway point, which allowed Musquin to move into a podium position right away. From there, Musquin continued to charge ahead where he ultimately made a pass on Dungey to take over the 2nd place position with about five laps to go.

Musquin held on to the 2nd place position to capture his sixth podium finish of the season at Round 11. Musquin’s runner-up position was good enough for the Frenchmen to regain his 3rd place ranking in the overall championship standings.

Musquin: “It was a great day – from having the fastest lap time to my first time winning the heat race this season. I got a decent start, that’s what you need to run with the top guys but I didn’t have good lines at the beginning. I chased down Ryan and passed him and was really happy but Eli was gone, it was too late. I’m happy to feel strong and get back into shape after battling with the flu for the last couple of weeks.”

Dungey went on to finish 3rd overall for the night, where he continues to hold the championship points lead with six rounds of racing left this season.

Dungey: “It was a little rough for us today but that’s the way it goes in racing. The main event we had the inside gate and I was able to sneak up front. I put pressure on Eli at the beginning and then just kind of fell off the pace. But considering where we were at first it was good.”

East 250SX Class
TLD Red Bull KTM’s Jordon Smith had a memorable night at Lucas Oil Stadium on the  KTM 250 SX-F FACTORY EDITION as he returned to the podium for the second time this season, finishing third. Teammate Alex Martin was also a force to be reckoned with as he battled most of the main event for the final podium position, ultimately crossing the line in fourth.

“The track was really tough out there, which makes me even more happy to be on the podium,” said Smith. “I did feel like I had the speed to do more than a third but after getting tangled with Alex (Martin), the leaders got away from me. It would be great to take this progress to the next race.”